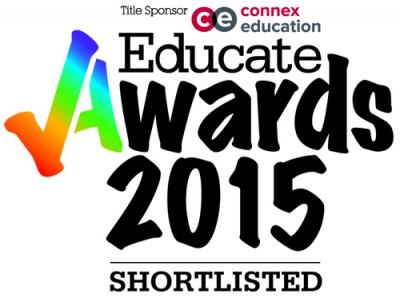 North Liverpool Academy is ending this term on an incredibly high note due to its shortlisting for two prestigious Educate Awards.

Competition for 2015’s awards was fierce, with it being the first year for which Educate received nominations from all six boroughs of the Liverpool City Region. As a school you are always aware of all the wonderful and amazing things your fellow schools are achieving with and for their pupils, making it even more of an amazing feat that the Academy will now be competing for the Outstanding Arts in a Secondary School as well as the Community Partnership Award.

Outstanding Arts is awarded to the best school stage show, performance or arts led project for the last academic year, taking into consideration maximum pupil participation. We nominated our Colditz inspired Spitfire ‘Spirit’. From inception to completion the project was directed by our students’ inspiration and passion to create something outstanding. The students’ year on year aim to create reflective art works in recognition of Remembrance Day and 2014’s efforts, also taking into consideration the centenary of the beginning of WWI, astounded staff, fellow students and parents. A huge well done to all students and staff involved.

The second award we are shortlisted for is Community Partnership, awarded to a school who has formed close community partnership links to create specific community led projects. North Liverpool Academy recognises its role in the community and aspires in all that we do to involve the community as much as possible. It was hard to select specific projects from all that happens at the Academy, but ultimately we selected ‘North Liverpool Academy in Bloom’ allotment project ran in conjunction with BNENC and our Spring Forward Community Festival.

Kim O’Brien, founder of the Educate Awards, says “We’re delighted to finally reveal the shortlisted schools ahead of the Educate Awards in November. This year has been a bumper year not only for the number of entries but the quality too. Each category was packed with inspiring projects and exciting initiatives…. Congratulations to all the schools shortlisted”

Next we will be attending the awards ceremony on 20th November at Liverpool Cathedral, we ask all to keep their fingers crossed and hopefully we will be returning with even more good news!